An article by Katie Bice published in the Herald-Sun on 16th April 2013 sounds a warning for all Marriage Celebrants and marrying couples. Bice's article was about a Family Court case in which a woman was seeking to have her marriage annulled. Shortly after marrying her husband she'd learned that he was already married. The woman's application was granted.

The warning for Celebrants is to follow through carefully in checking and re-checking paperwork - confirmation of divorce, passport information and other legal documentation presented as evidence that the people to be wed are who they say they are and that they are legally able to be wed. Verbal assurances from either party are just not enough. Celebrants should aim to physically sight any and all required documentation.

The article gives no indication whether action is to be taken against the Celebrant. 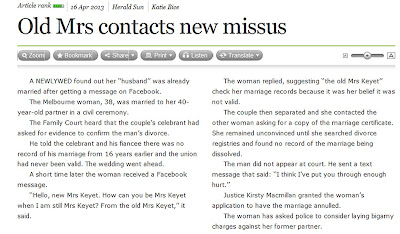 Posted by Celebrants Online at 7:04 pm